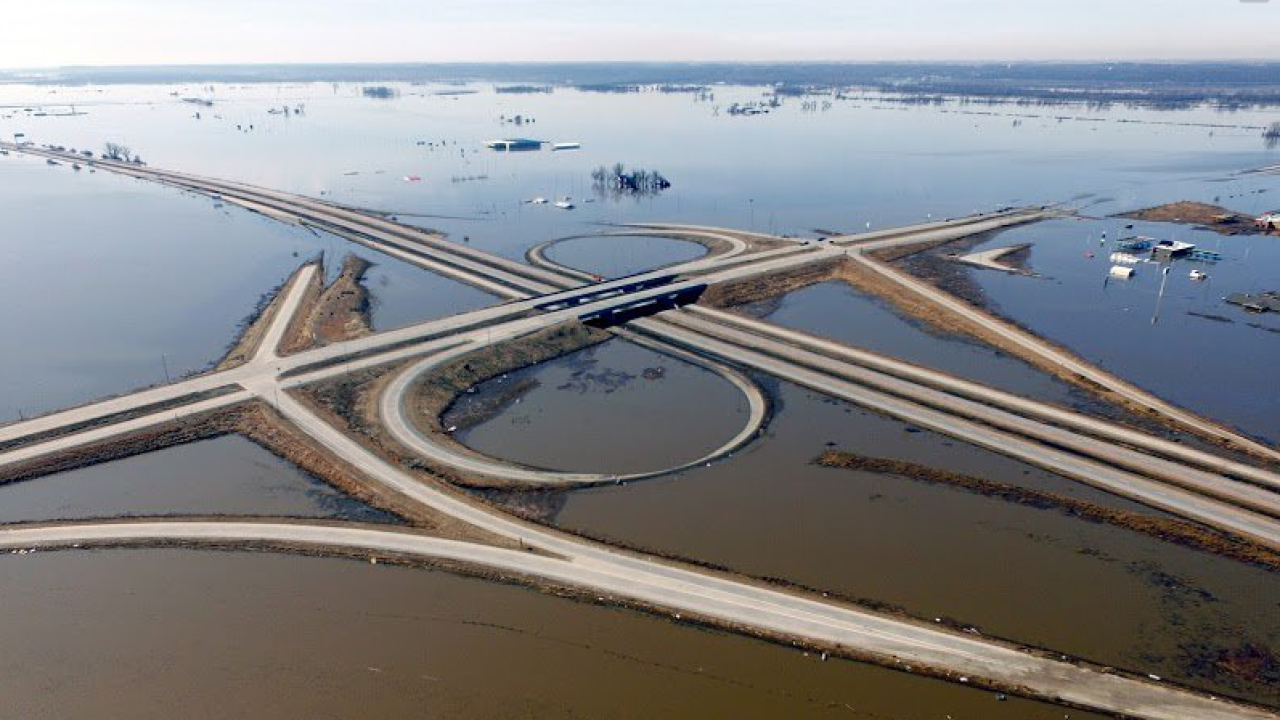 The picture is of the 2019 flooding in the Omaha/Council Bluffs area. What do you see? City-dwellers see flooded roads, farmers see flooded fields.
Math note: A  house with a footprint of 1,400 square feet will collect about 850 gallons of water with a 1" rain. Remember this.
Middle America is experiencing a lot of flooding, even with the reservoir system in the Missouri River basin. Towns are being destroyed that have stood for decades, some spanning three different centuries. Even interstate highways systems are being disrupted by flooding.
Homeowners, city planners, road builders and farmers alike all want to get rainwater off their properties as quickly as possible. How does this create flooding?
Our earth was designed so when the rain falls, the ground absorbs what it can.
When the ground is saturated, the water on top of the ground moves to the lowest level it can find.
The gravity-induced runoff-rain collects in runways of different sizes, called creeks, streams, rivers, etc. and they make their way toward the equator, the part of the earth with the most mass, hence the most gravitational pull. Gravity builds rivers. Gravity helps makes floods.
After the flow stops, the saturated ground gives up more water as the sun and wind evaporates the moisture. (Water in the soil is often called ‘moisture’.)
And be reminded, excess surface water percolates down through the soil into the water table below. That’s how a balanced watershed works; precipitation, saturation, runoff, evaporation, percolation.
Flooding, then, has at least five inputs:
1) When more rain falls that the historical watershed can manage.
2) When historical floodplains are encroached upon, levees built to narrow the path a river can expand onto.
This causes excess water to force out elsewhere. Nature wins.
3) When watershed processes are compromised by human endeavors and the watershed has to handle a typical rain or snowmelt in a shorter period of time.
For example, when the natural evaporation/percolation cycle is short-circuited by engineered drainage systems to send water into the watershed
instead of allowing it to evaporate or percolate.
4) When small towns along rivers, who use underground water for their communities, switched from outhouses and septic tanks, to sewage processing and dumping into rivers, adding to the amount of water each river receives. The natural watershed would never see this water if it weren’t for human engineering. *
5) Central Air conditioning systems takes humdity out of the air and puts it in the sewer system, which goes into our rivers.
Most home A/Cs produce 5-20 gallons of water per day. think of all the air humidity being dumped into the Missouri river. Especially during the three hot days
that usually preceed thunderstorms, and the week of humid weather after the storm. Lots of water being taken out of the air and being put into the rivers.
Here is a link to a YouTube video with Lucy and Ethel in the candy factory. It’s a perfect illustration of what happens when we tamper with the natural watershed: https://www.youtube.com/watch?v=NkQ58I53mjk
The internet says we have about 4 million miles of paved road in the US. Interstate highways have 24’ wide pavement, each side. Every mile of interstate highway takes 1.68 acres, beside the shoulders, medians and right-of ways. If all paved roads were this wide, America would have 3,360,000 acres of land unable to act as a breathing watershed. Architects and planners want to move water off their roofs and streets as quickly as possible. House gutters put rainwater onto driveways. This puts water in the streets, so storm sewers can rush the water to the nearest river, raising the water level faster than normal, because the water arrives at the river in a shorter period of time.
Remember the sample house? It displaces 850 gallon of water with a 1” rain. The internet says that besides rentals and businesses and public-oriented buildings, there are about 80 million owner-occupied houses in the US. Wow. Lots of water.
And in the cities, the people water their grass and wash their cars. The extra water goes into the street. And, city land under the buildings and roads are not able to absorb as much rainfall and snowmelt, so that water is going to the river, instead of sitting on the land and evaporating or seeping into the aquifer.
Add to this, farmers trying to control the moisture level of rural land, put drainage tile in the ground to speed the drying of the soil, to increase crop output.
They do this to make a few more bushel to the acre, which will drive down farm prices even more. Sorry, but this needs to be said.
About 30% of American farm ground is foreign-owned. You decide if economic goals of foreign owners affects American watersheds water levels.
Since the ocean is the repository for water than drains from the land, which covers 30% of the earth, shortening the watershed cycle may raise oceanic water levels from pre-development days. AND, since ocean water (3.5% salinity) take longer to evaporate than rainwater, (do a fact-check), this also becomes an issue in charting rainfall expectations.
With the accelerated watersheds we now have, floodplains need to be recalculated regularly . Today’s increased water runoff from American’s cities and farmland needs more, not less space to maneuver to the sea.
Given all this, we should not be surprised at interior river flooding.
Eric J. Rose
*Question for USACE: If we added all the water put into the Missouri River basin by towns that use well water instead of river water, what stream order would that collection create? And don't forget to add all the bottled water, tea, sports drinks, soda and beer trucked into these little towns. It al has to go somewhere.
*I have written a book for middle-graders about water cycles and human water use in the US.
It was written t explain the way water interacts on both the natural and the man-made world.
It is a two-volume set with 60K words total. I am seeking a literary agent.